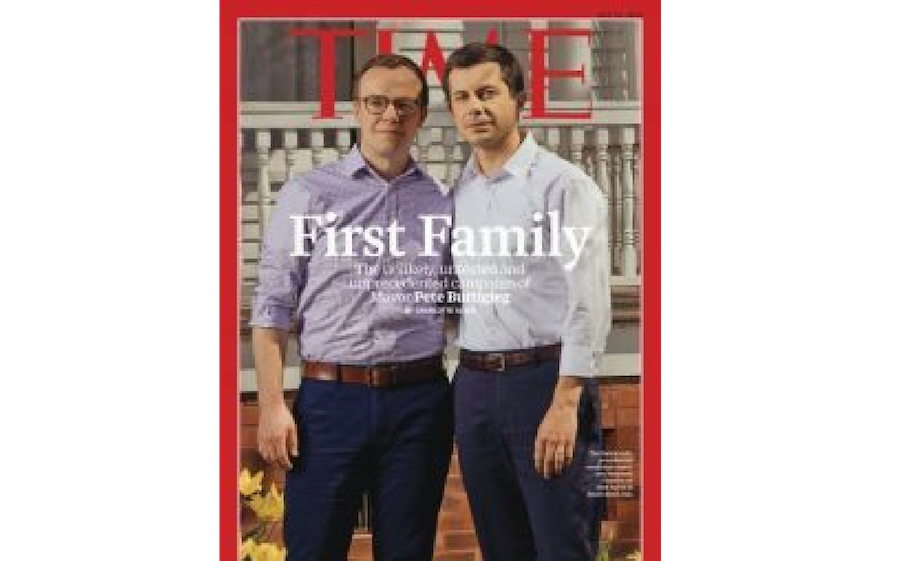 May 13, 2019 cover story of TIME magazine features America’s (future) “First Family” — Pete Buttigieg, an Episcopalian Mayor of the city of South Bend, and “his” husband, Chasten Glezman. In 2015, at the peak of his campaign to be re-elected as city Mayor, Buttigieg declared that he was a homosexual. He won the election with 80% of the votes. The TIME says that today 67% Americans, including 44% Republicans, support homosexual marriage.

The TIME Is not saying that he will win Democratic nomination or the race. It is saying that homosexuality has won America.

The short answer is that evangelicalism forgot that winning souls means winning minds. A majority of American theologians, including many evangelicals, believe that the Bible is a collection of “stories”: For many, Genesis 1-11 are definitely stories. The earlier idea that God made man in His image, male and female, is a “story”. If so, what exactly is maleness and femaleness?

Indian Bhagwan Osho Rajneesh (1931-“90) taught Americans that reality is one. All dualism, including male and female, good and evil is an illusion created by the intellect. (For details please see my chapter on Rajneesh in “The World of Gurus”)

Hippies and the New Age movement learnt Hindu/Buddhist Tantric physiology that everyone of us has male and female energies within us. The female energy “Kundalini” is the Serpent Power at the base of our spine. It lies dormant in a psychic center or “chakra”. Meditation, especially sexual meditation, arouses it. Once awakened, the Kundalini power travels up through the spine and passes through five chakras, giving psychic (spiritual) experiences to the meditator. Finally, the female energy merges with the male (Shiva) energy at the 7th “Crown chakra”. At that point, the meditator attains enlightenment, for the male and the female energies within him become one.

Traditional Christian marriage assumes that we are finite. I am male, not a female. I need my wife to become whole. But what if I am infinite . . . if Brahma (infinite God) is within me. Then my idea that I am a male, incomplete, finite, is an illusion. For the female is already within me. In order to realize my divinity, infinity, oneness, I must renounce marriage and awaken the feminine within me. This is a basic reason why serious Hindus and Buddhists, seeking spiritual enlightenment, begin their spiritual quest by renouncing marriage. This is called “Brahmacharya”. It is often mistranslated as “celibacy” which means, renouncing sex. Brahmacharis (such as Mahatma Gandhi or Rajneesh) renounce marriage but indulge in sex in order to experience oneness within (that is, to become God).

Carl Jung, the famous Swiss Psychoanalyst, visited India in 1936-’37 and brought this Indian perspective to the West. He gave scientific sounding names, “anima” and “animus”, to male and female energies. Both, he said, are present within everyone (for God never made us male and female). It has taken a few generations for America’s mega-charismatic-evangelical churches, such as Bethel in Redding, to start seeking kundalini spirits.

*** (As President Obama says) one of America’s foundational ideas that all men are created equal in God’s image is a “story.” Revelation requires faith or obedience, a story does not.

*** The revealed idea was that the ultimate purpose of human sexuality was to make us rulers. Now that is deemed to be a “story”. That means God did not actually bring Eve to Adam. He did not actually ask the two to become one in a permanent marriage, to be fruitful (have children) and nurture them in such a way so that they could establish their dominion on the earth and rule over it as God’s children. Perceiving Genesis as stories gives human beings the right to make up their own story that sex evolved for fun, not for binding one permanently to his/her spouse.

*** If Genesis is stories, then the idea of sin, including adultery and sodomy, are outdated stories. Human beings are not fallen sinners. The belief that they will be held accountable for their sin, including sexual sin, is merely a religious story. There is no revelation from a Holy God. There is no standard of sexual holiness that God requires. There is no final judgment.

America is lost. American Christianity handed over to the Devil, the responsibility to disciple/educate its own children. Therefore, from June 25-29, some of us are gathering in Phoenix, AZ to begin an education revolution. It seeks to turn every church into a web-based college classroom. Students will enroll in Christian universities, but go to local churches, Monday to Friday, to attend classes online under Academic Pastors.

An Academic Pastor is a Youth Pastor Version 2.0. He/she is a home schooling mom or dad, credentialed to become Church-College parent.

To learn more, please visit www.RevelationMovement.com. Please pray for the financial needs of participants keen to disciple their nations.

For every donation of $100 or more you will receive a signed copy of “This Book Changed Everything: The Bible’s Amazing Impact on Our World.” The book explains why Buddhist Enlightenment is winning the West. Why the world’s freest and the strongest press has become Fake News. Why most Americans no longer trust their post-truth politicians.