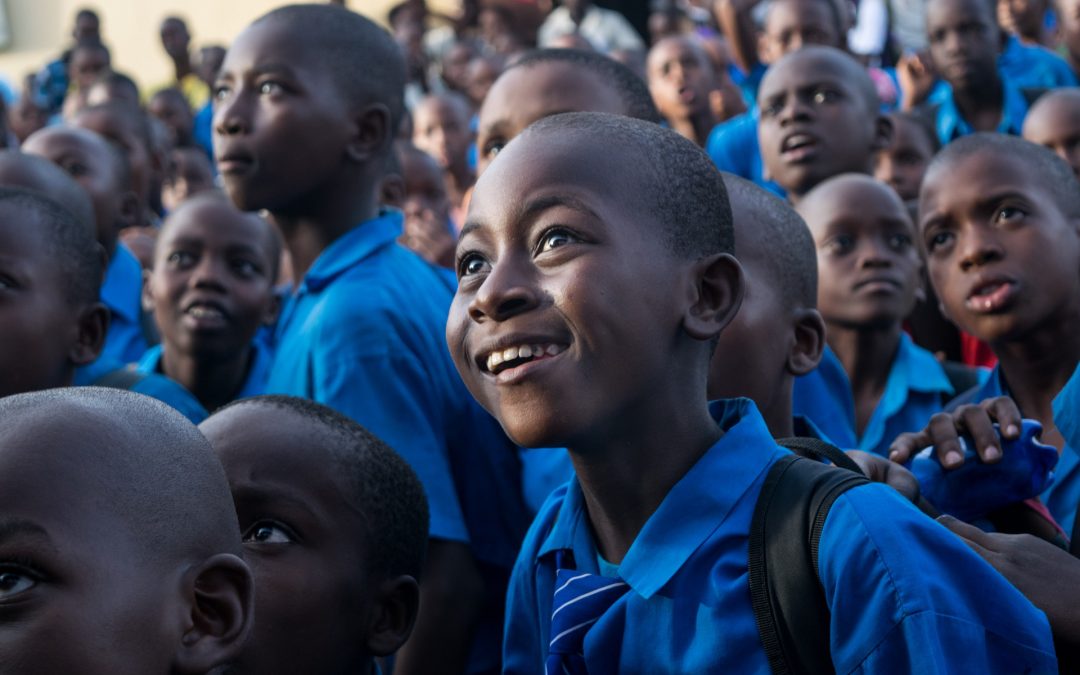 (Question 1) A great deal of development aid has already been provided in Africa. Why does nothing seem to change?

Finland and Switzerland are among the most developed nations in Europe. No one gave them any aid. Nor did they go out to colonize other nations. In fact, they are better developed than European nations that looted their colonies e.g., Spain, Portugal, Belgium, France, and Russia.

Land, natural resources, climate and people are a nation’s hardware. The ‘word’ — language, laws, literature — is a nation’s software: its soul. Language carries the ideas that bind a people into a common culture and drive their institutions. Reformed nations developed because they educated the soul — minds, hearts, character — with God’s “word.”

Dambisa Moyo, Zambian economist, educated in Harvard and Oxford, is the author of “Dead Aid: Why Aid Is Not Working and How There Is a Better Way for Africa.” She states that aid worth US$1 trillion was given to Africa over five decade. Some of it helped, but most aid has hindered sustainable, long term development. Aid (i.e. injecting capital) deals with the hardware. It doesn’t change a nation’s soul — the software.

Education addresses the soul. In most of Africa, “modern” education came about a century ago. Most universities taught materialistic (non-spiritual, secular) worldview which deceived African nations into thinking that financial aid or loot is the secret of economic development. Therefore, ambitious individuals, who cannot go out to colonize other nations, fight with each other to loot their own nation, its resources, including aid dollars.

The failure of aid shows that the secular belief is false that economics drives the world. Europe’s Reformation believed that material progress takes place when we seek God’s kingdom and righteousness. Secularism has failed in Africa, just as it failed in most of Asia, Eastern Europe, and South America.

(Question 2) There are more and more Christians in Africa. Should the countries / the continent not be better off with the new Christian values?

Indeed, a country such as Uganda is 84% Christian. It became an independent nation in 1962. Since then its governments have changed nine times. Yet, not a single transfer of power has been peaceful. Its constitutions have been “democratic” but military and militia leaders have had to kill each other to capture power.

By the time the British established Uganda’s first university (1922), their own “Christian” universities had become secular. They taught “Liberalism” which has deceived the West as well as the brightest of Ugandan leaders.

The sadder truth is that the 20th Century “Conservative” Evangelicalism which evangelized Africa became anti-intellectual and escapist. All it wanted was for Jesus to come back and take Christian souls to their mansions in heaven. It promoted ethical “values” for personal behavior but forgot the Reformation’s rich social (political, legal, ethical, economic, literary, educational, scientific) legacy.

This modern evangelical Gospel “saved souls.” It had little light to guide nations. It had no power to reform, heal and bless Africa. For example, the traditional African mind understood “tribes”, “chiefdoms”, “kingdoms” and colonialism. It had no concept of “nation.” This point is explained in my new book, “This Book Changed Everything: The Bible’s Amazing Impact On Our World” [In German, “Die Seele des Westens” (Fontis, September 2019)]. Through the Atlantic Charter (1941) American President, Franklin Roosevelt, forced European empires to end imperialism. Therefore, following WW2, African colonies were made “nations.” But, no one taught former colonies how to become great nations. In fact European intellectuals began to despise the idea of nation.For prior to WW2, the Fascists had separated the idea of “nation” from the Bible. That made them abuse virtues such as “nationalism.”

The Fascist corruption of nationalism, made it a repulsive word for the secularists who did not read the Bible. The Evangelical seminaries lacked the competence and the confidence to apply the Bible to politics. In fact terms such as ‘nation’ and ‘nationalism’ make them nervous, even though, the Bible says that the Bride of Christ is glorified so that she may give light to the nations (Rev 21: 22-24). The Bride becomes the New Jerusalem so that it may produce tress whose leaves are for the healing of the nations (Rev 22:2). Evangelical theology became so individualistic that it became irrelevant for public life. It marginalized even the church, which use to be the centre of every village and town in Europe. Earlier, to reform the Church meant reforming a nation. For the church embodied a nation’s soul: its music, art, architecture, core ideas.

Africa is in trouble because, as the Lausanne Congress observed in 1974, the default Evangelical eschatology has paralyzed the church. A new reformation or theological ferment is needed to equip the church to transform African nations.

(Question 3) Some experts think that help makes people dependent. Would it not be consistent to withdraw aid from African countries? Does that mean that we would starve people to death?

The Lord Jesus fed the hungry with bread and fish. When they came back for more bread, he refused to feed them. He pointed them to the true bread (John 6), to the real water of life — himself (John 7: 38). For “man does not live by bread alone, but by every word that comes from the mouth of the Lord.” (Matthew 4: 4; Deut 8:3). The soul food, the software — the word — matters.

Birds and animals look for bread. They don’t mind stealing it. We object to theft and loot for Man is different than animals. He was created in the Creator’s image to be creative. We are to grow grain or buy it in order to make or buy bread. We need to earn enough to share food with the needy, including with birds and animals.

“This Book Changed Everything” [Available from manager@SoughtAfterMedia.com] has a chapter that studies the secret of Germany’s Economic success. In their home in Wittenberg, Martin and Katherine Luther trained theologians and national leaders. Mrs. Luther taught them how to grow grain, vegetables, and fruit; how to keep chicken, goats, cows, and fish; how to brew beer, build buildings, keep careful accounts; as well as to cook and serve food. Katy’s multiple farms and kitchen fed 30-40 people everyday.

Martin Luther wrote biblical work-ethic on paper; his wife, Katy, wrote it on the hearts and minds of Germany’s intellectual/spiritual leaders. In Africa and Asia, hardly any Christian seminary is producing the kind of leadership that the Reformation produced in Germany and Geneva.

(Question 4) What role does large population growth play in most African countries?

“Large population growth” is not Africa’s problem . . . stunted population (intellectually and morally) is the difficulty. Intellect and character are fed by the “word.” The Holy Spirit is given so that gifted leaders may educate the whole body of Christ into Christ-like mind and character (Ephesians 4: 11-13) Unfortunately, many see the gift of leadership as a passport to personal self-aggrandizement. They send their children to schools to learn — not to serve, not build up others — but to become wealthier, to serve Mammon.

Adam Smith’s classic work, “Wealth of the Nations” (whose title comes from biblical passages such as Isaiah 66:12) systematized the economic system produced by the Protestant Reformation.

A hunter-gatherer works day and night. His hard work, however, does not make him wealthy. The difference between poverty and wealth is made by the mind: how much thought, creativity, skill, dexterity, judgment one puts into his work — that makes the difference. The thought, the “word”, the software turns subsistent economy into surplus-producing work. Reformation built economically strong nations because Luther, Zwingli, Calvin, Knox, Comenius, and later August Harman Francke, here in Germany, argued that every child must study to become like his Creator. The Spirit of God is the Spirit of Truth. He is the Spirit of knowledge, wisdom, understanding, judgment (Isaiah 11: 1-9).

The Communists “educated” Russia and Eastern Europe and turned their educated elite into crooks. Secular (whether socialist or capitalist) education has produced the same corrupting consequences in Africa, Asia, and South America. Education is essential, but what you teach and who teaches are even more important. Africa’s failure proves that state-education is a massive disaster.

The Lord Jesus commissioned the church to disciple nations. The Reformers obeyed that command. Contemporary West, including the Western church, handed over to the Devil the divine mandate to educate the young minds.

(Question 6) How can meaningful aid be provided for Africa?

Great nations such as Germany need to teach Africa the spiritual secret of their own success. For example, every German knows that German women rebuilt Germany desolated by WW2 . . . but I never learnt that in Indian schools, universities, media or the church. We heard only about the Marshall Plan.

What emancipated German women? How can we empower tens of millions of African women and children who still haul water on their heads every day, morning and evening?

A traditional African priest is a magician. He performs mumbo-jumbo rituals. Five hundred years ago, a German priest was no different. As Luther studied the Bible, he saw a very different picture of a priest as a “shepherd.” A biblical priest was supposed to be like a Jewish Rabbi. His role included being a community’s learned teacher. So, Paul became a preacher-teacher (1 Timothy 2: 4-7; Titus 1:1). He mentored Titus and Timothy to become Pastor-Master. That became the Reformation’s vision of a Lutheran or Calvinist pastor. A pastor’s home became German child’s first school.

Luther’s own home in Wittenberg was a model. University students who lived and learned with the Luthers became replicated that model. That made the church-school the nursery that bred German leaders. Africa needs an education-revolution where the Church and web-based curriculum are fused to provide high quality, yet affordable education to the masses. This education must marry truth and virtue, character with information and skills. Revelation Movement is serving as a catalyst to develop this kind of education. Participants from 10-12 countries will meet in Phoenix, AZ (USA) from June 25-27, 2019 to plan the 21st century education-revolution to address these issues. For details, please visit www.RevelationMovement.com

(Question 7) After all, the world knows one African country that has changed for the better, Rwanda. What are the reasons for the change?

Rwanda is a powerful proof that the Gospel can reform Africa. In 1994, a politically powerful tribe massacred a relatively weaker tribe. Both had become “Christian”, and they hated each other. This was like Europe’s Roman Catholic-Protestant wars of the 16th-17th centuries. Conflicting socio-political-economic interests became the fuel that the Devil used to burn-up innocent lives in fiery flames. Thankfully, just as Europe found the grace to go deeper into the life-in-Christ, Rwanda is also finding that grace.

Africa’s future can be better than its past. Jesus is “the same yesterday, today, and forever.” He reformed nations in the past; he continues to do that today. Our job is to be so filled with the Spirit so that, through us, the earth may be filled with the glory of the knowledge of God as the waters cover the sea.