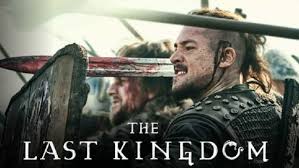 Did racism inspire the white police officer in Minnesota to kill a black gentleman by pressing his neck with his knee? Was it not self-evident to the officer that his victim had an “inalienable right to life?” In case that crime was a fruit of systemic racism in American police, then is America a pagan country now?

Why would those protesting the crime set fire to St. John’s Episcopal Church in Washington DC? Is it because paganism does not respect what is sacred — dedicated to God?

“The Last Kingdom” is an engaging Netflix Saga which has completed four seasons. Its thirty-six episodes, each about 55 minutes, have built up such a fan-following that Season 5 seems inevitable.
This historical fiction is based on the Bernard Cornwell’s series of novels, collectively called “The Saxon Stories.” It portrays Alfred the Great as a wise and learned Christian who ruled the tiny kingdom of Wessex (Winchester) from c. 886 to 899.

Priests and nuns, sorcerers and witches are present everywhere in the Saga. The Pre-Reformation church had begun to civilize Europeans who had little respect for what was sacred — human life and mind; sex, marriage, and family; church and priesthood. A realistic depiction of pre-Christian culture makes the program unsuitable for children. It contains brutal scenes, vulgar language, and some nudity. Yet, the Saga needs to be seen because very few theologians and apologists in America understand Paganism. (A good exception is Dr. Peter Jones).

When the Danes were terrorizing the tiny Christian kingdoms, Alfred, a scholarly man of piety, prayer, and faith believed that it was God’s will to build great and godly nations. No one interpreted his vision of building a great England as White Supremacy because (a) the Danes, demoniacally destructive, were also white, and (b) Alfred knew how sinful his fellow Christians were. He dreamt of uniting Saxons, Danes, and Scots as one nation under triune God, ruled by justice, righteousness and peace. The integrity of Alfred’s life and the wisdom of his steadfast vision inspired a few Englishmen and women to risk their lives. These included some brave, wise priests and nuns who put above their self-interests God’s will to build a great, war-free England.

King Alfred, played by David Dawson, is an incredibly strong character, but he is not a warrior. The hero who repeatedly saves Alfred, his family and his dream for a future England is Uhtred son of Uhtred, played by Alexander Dreymon.

Uhtred was born and baptized as a Christian. As a boy he was enslaved and raised by Pagans. That gave him the opportunity to learn the Vikings’ military strategies, including their strengths and weaknesses. That knowledge equipped him to re-train Christians to withstand invasions. He became a Saxon commander because he could foresee Danish war-games instinctively and beat their moves.

Because he grew-up as a pagan, a bit of paganism stayed with this commander-in-chief of Christians. That made it easy for bigoted, self-righteous Christians to suspect and hate Uhtred. The Saga’s self-destructive Christian bigotry has striking parallels in President Trump’s America. 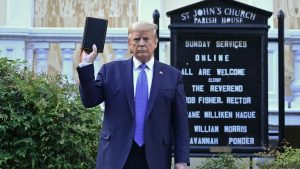 In “The Last Kingdom” racism is an aspect of paganism. The pagans have no Word that tells them that all men are created equal. The races killing each other — Danes, Saxons and Scots — are all white. Except for the devout believers such as Alfred, most white races do not see each other as human beings, endowed with inalienable rights to life, liberty and the pursuit of happiness. The ideas of justice, compassion, peace, and fairness come from Christianity. These Christian virtues do impress a few Danes. Alfred was glad to convert and embrace one such Dane war-lord. Uhtred allows his daughter to go with another who treated his captive daughter with such honour that she fell in love with him.

Interestingly, the supernatural power is with the sorcerers and witches. The Christian’s magic is in their written word, especially Alfred’s Chronicles. Average “white” Dane, uncivilised by the Word, considers it his duty to burn down “white” Saxon villages, desecrate sacred places, kill every man, enslave and rape every white woman that he can.

Pagans revere supernatural evil. They have no written word that requires them to respect what is sacred — dedicated to God: marriage, sexuality, family, priesthood, the Church or the Holy Bible. The Church civilized England because it taught the kings and soldiers to revere churches, monasteries and nunneries, bishops, priests and nuns. To hurt a priest or nun became an absolute taboo in Christianised Europe. The kings defended every place or person that was sacred — dedicated to God. Before the Reformation which made God’s Word available to everyone, the Church was the only available civilising force in Western Europe. Sex, for example, became sacred only because a priest dedicated a marriage to God.

Every week some Hindu fanatics burn down one or two (mostly rural) churches in India. They beat up pastors, evangelists and their wives who are transforming Indian society at the grassroots. God’s servants are beaten up and unjustly arrested by Hindu police officers. No one is surprised when uncivilized Muslims and Communists burn down churches. But why would Americans protesting against the death of a man in police custody set fire to a Church?

I have not yet heard a media outlet inquiring why America has lost respect for what was sacred until recently. The Press started talking about the burning of St John’s Episcopal church only after President Donald Trump walked to that Church and held up a Bible in a photo op (see the picture below).

Then, immediately, the news media began mobilizing mainline bishops and clergy to condemn President Trump. These are the Church leaders that have driven Christians out of mainline churches into the arms of Paganism.

The relevance of “The Last Kingdom” dawned on me when a section of the evangelical community started condemning President Trump for holding up the Bible in front of the Church. I asked myself, would these self-righteous Christians condemn Trump if he got re-elected and placed one hand on the Bible to take the oath of office?

Uhtred, the self-confessed part-pagan (fictional) Christian, who saved England, repeatedly faced the kind of ridicule some evangelicals are heaping upon President Trump. They are too holy to allow a part-pagan President to honor what is sacred — God’s Truth-word and the Church building dedicated to God’s worship.

“The Last Kingdom” is not a Christian TV series. But one can be thankful that non-Christian novelists such as Bernard Cornwell and Tom Holland are reminding the world of how Christianity made Western nations some of history’s greatest societies.

Without the Bible American intelligentsia has no way of knowing that God called Abraham to make him a great nation — a light to show all nations how to become great. America’s ignorant intelligentsia thinks that “Make America Great Again” (MAGA) cannot possibly be God’s will. Therefore, it has to be a slogan calling for White Supremacy. Bernard Cornwell’s part-pagan hero, Uhtred, not only saves King Alfred’s Christian kingdom of Wessex, he also makes it possible for Christianity to make Britain great.

Not everyone can spend 36 hours watching a bloody Saga. But on Tuesday June 9th, please do tune into Jeff Fountain’s interview with Tom Holland, another secular author whose book “Dominion: How The Christian Revolution Remade the World” needs to be read by thoughtful Christians.
For details of this interview please visit https://www.schumancentre.eu/