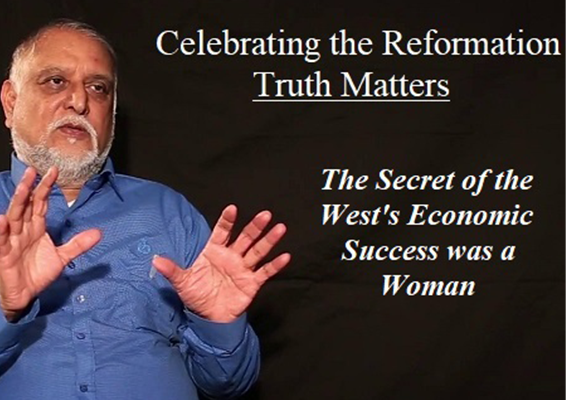 (Celebrating the Reformation with Vishal Mangalwadi-1)
Immigration has become a major challenge to the West.
People want to migrate to the West because it respects individual rights and freedoms. It believes in human dignity and equality. It puts law over rulers and stands for good education. The West has been the engine for scientific and technological advance.
But the West was not always like this. And, once again, it is changing before our eyes.
Although it is still the least corrupt and best developed part of the world, now it labels itself as Post-Truth. People no longer trust their politicians, the press, and even the integrity of some of their scientists and industry.
So, what made the modern West a civilization that believed in Truth?
Two thousand years ago, a Roman Governor was able to declare a public figure innocent and then go on to crucify him. How could he do that? Didn’t he know that he was violating his fundamental right to life and destroying the people’s trust in the judicial system?
Well, back then the West did not rely on trust. It terrorized people into submission.
It did not believe in truth because the Greeks had learned that the human mind, left to itself, could not know truth. Therefore, like my culture in India the Graeco-Roman culture was also built on myths, magic, and mysticism.
A return to Truth created the modern West. Let me illustrate.
I was trying to buy Tram tickets in Amsterdam. I asked two Americans:
“How does this machine work?”
“Why do you want to buy tickets?” they said. “We’ve been travelling around for two days. No one has come to check tickets.”
I was amazed: How did Holland create a society that could trust its citizens? And why is the new generation rejecting the morality that resulted in the West’s unique freedom and prosperity?
Five hundred years ago, the Premodern West was as corrupt as my nation. What caused the change was a movement called The Reformation.
The Reformers were rebels. Most rebellions destroy. However, Sixteenth Century reformers succeeded because they enthroned Truth above themselves and their religion.
Can we know Truth?
The Reformers sought Truth because they believed in a Creator who knows truth, and communicates it just as a father teaches truth to his children. The reformers followed the Bible’s teaching articulated best by St. Augustine: The human mind was made in God’s image. Therefore, it can and ought to seek Truth. This faith in knowable – revealed and rational truth made the West a uniquely thinking civilization.
In contrast, Buddhist monks in China didn’t read the books they received. Their sacred texts taught them that words cannot communicate truth. Therefore, they stopped reading and, instead, they meditated on the ‘sacred’ sound of their rotating bookcases.
The Bible transformed Holland because it inspired the reformed church to educate everyone. Education grounded in the Bible cultivated love for truth and virtue.
Pagans made up their own gods. Likewise, the Postmodern West is like the premodern Pagan age. Both reject objective truth and morality. They make up their own “truths” and moral values. Flexible morality destroys a society’s moral capital. It makes it impossible to trust each other!
By becoming Post-Christian, the West has naturally become Postmodern and Post-Truth. It has amputated its soul, the Bible, which created the modern world. Once again human opinions, feelings and vested interests claim authority over Truth.
The quest for truth was the engine of the West’s intellectual, economic and social success. Losing truth means losing trust. To lose trust is to lose peace, progress and prosperity.
Truth matters.
Therefore, this video series will explore why the Bible created the Modern Age of Truth.
Please subscribe to the YouTube channel “Truth Matters” and share this video-series with your friends
Thank you
Vishal Mangalwadi